My Interview with Alistair Cross, author of The Angel Alejandro

Hello, everyone. I'm pleased to have interviewed another wonderful author, Alistair Cross, the creator of The Angel Alejandro!

1.      Tell us about yourself.
I was born in a little town in central Utah and I started writing stories when I was about eight years old. I got serious about it in my twenties, and by the time I was in my thirties, I began submitting manuscripts to agents and publishers. In 2012, when I was 34, I got published, and later that year, I met one of my literary heroes, bestselling author, Tamara Thorne, whose books I’d been reading since my late teens.

Tamara and I became fast friends - it was as if we’d known each other our whole lives - and one day, she asked me how I’d feel about writing a book with her. I was overjoyed by the idea and quickly found that this was an ideal partnership. Our first novel together was The Cliffhouse Haunting, in 2014. We’ve released several subsequent collaborations and we also began Thorne & Cross: Haunted Nights LIVE!, a weekly radio talk show dedicated to horror, where we interview authors, crime buffs, paranormal investigators, forensics experts, and anyone else with experience in the field.

Tamara and I write books together but we also write books on our own. At any given time, we’re working on a minimum of three books between solos and collaborations. In 2015, I released my first solo, a vampire novel titled The Crimson Corset, which was a bestseller. I’m very proud of that.

2.      Growing up, was there a book you read that made you desire to write for a living?
The first book I remember reading that made me want to write was a children’s book by Edith Boutelle called The Ghost That Goofed. It was about a ghost named Belinda who wants to scare a new family away from the house she haunts. This book is reason I suggested Belinda as a name for our heroine in the Thorne & Cross novel The Ghosts of Ravencrest.

3.      Did you have another ideal career besides writing?
No. There really was no Plan B for me, which is probably the reason I’ve pushed so hard for my writing. I think I had two choices: I could either work a nine-to-five job and just get by until I retired, or I could write. There isn’t anything else I’m passionate about enough to put this much work into.

4.      When did you first start writing?
I first remember trying to develop stories when I was about eight years old.

5.      What do you like to do when you’re not writing?
I like to drive around without destination, radio blaring. Reading. I also like petting the cat. Thinking about writing. I try to take Sundays off so I can just watch movies and veg out.

6.      What does your process look like? Any necessary rituals to bring the words about?
My only writing ritual is to sit down every day and write. I treat it like a job because it is a job, and that means no phone calls or other disruptions. I write 8 - 10 hours a day, on Skype and in the Cloud with my collaborator, Tamara Thorne. We devote X amount of hours to each project every day, and after hours, I often find myself back at it. Lately, I’ve been up till four, five, and even six in the morning writing. 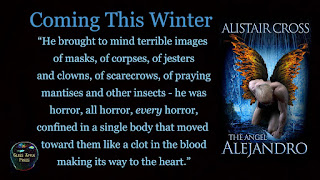 7.      Has real life and writing life ever merged?
To some degree, I suppose it’s impossible for writing and real life not to intersect at some point - but I never set out to write anything that’s biographical in any way. To me, fiction is a lot more fun than real life, probably because fiction makes sense - or at least it should make sense. Reality is a little different - sometimes things happen for no apparent reason.

8.      What kind of research do you do and how long do you spend researching before beginning a book?
I usually research for several weeks before I begin a book, and that research continues on an as-needed basis until the book’s completion. For The Angel Alejandro, I did research on a multitude of topics including rock collecting, guitar playing, and exotic dancing.

9.      Where do you come up with your ideas?
So far, I’ve never had a shortage of ideas and always have several on the back burner to start when I finish with my current project. As for where they come from, the truth is, I don’t really know. I get ideas from everywhere, all the time.

10.  Tell us a little about The Angel Alejandro. How did it come about?
The Angel Alejandro is about an angel on a mission to save a woman’s life. He ends up with amnesia after crash-landing to earth during a severe storm. As he tries to uncover his lost identity, his latent supernatural powers begin tipping the natural balance, drawing the attention of dark entities who want to harvest his soul - and wreak havoc among the townspeople while they’re at it. 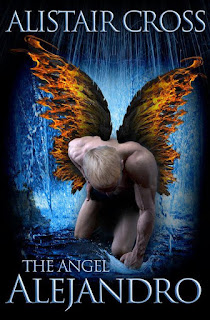 Like most book ideas, this one came in sections - some of which predated the writing by a couple of years and others that were formed as the writing went along. But there was one defining moment that brought it together: A man walking down the street near my house.

He looked like he’d stepped right out of 1880s London, and the moment I saw him, I knew he belonged in this book. His slicked-back hair, shiny black briefcase, and long ebony cigarette holder sparked my imagination and by the end of that day, Gremory Jones - the main antagonist in The Angel Alejandro - was fully formed and ready to tell me his dark, sordid story.

11.  What was the process like for this book?
I wrote it alongside several other projects so this book took me about a year and a half, all told.

12.  What was the hardest part of writing The Angel Alejandro?
The hardest part about this book was that it had so many characters. I wanted to explore the entire town and see how it was being affected by the presence of an angel and some demons, and this required that I get into the minds and the lives of multiple characters. It was a lot of fun but it was challenging at times, too.

13.  What was one of the most surprising things you learned in the creation of The Angel Alejandro?
That most strippers genuinely enjoy their jobs.

14.  Do you have a favorite chapter and would you like to share a sample?
My favorite scenes were with Beverly Simon (a psychic who begins having vision about the coming destruction) because her scenes allowed me to get very dark and creepy, which I love. Here is a piece from one of her visions:

Beverly decided to ignore the text, resolving that she was done with men for good. Or at least for a while. Trevor was the latest in a long string of bad relationships. She’d do just fine on her own.
She set the phone down and began drying her hair. Staring at herself in the mirror, she thought a new hairstyle was in order. She didn’t fuss much over things like dyes and manicures, but maybe an appointment at Vang’s Bangs for a new look would keep the spinstery feelings at bay. I’m only thirty-four, she told herself. It’s too soon to feel like an old maid. A moderately young maid, maybe, but not an old one. Her reflection smiled back at her.

Then the smile crashed. Images flashed - images so powerful, so brutal, that she clutched the counter for balance. Her towel dropped to the floor and the room spun.

Beverly sees his shadow. He stands in a darkened alleyway, walking stick in hand.
He turns and faces Beverly and she hears bells jingling. At first, they’re distant, but as he nears, their volume rises, rises. He’s close now, right in front of her.

The ice-white glint of wet teeth as his mouth curls into a smile - a smile that isn’t sane. Blood gushes out from between those straight, white posts, like water bursting through narrow cracks of a dam.

A cloven hoof hits the earth in a cloud of dust as lightning flashes and thunder cracks.
The bells ring out terrible, cacophonous sounds so loud Beverly feels them in the back of her throat, in her teeth.

Disembodied laughter - deranged, lunatic giggling - swells around her, competing with the thunder and the roar of the bells.

The man stands before her now, his face shrouded in black shadow beneath a tall hat. He raises his head toward the light, revealing a face that is as handsome as it is terrible. It is the kind of face that will drive her mad if she looks too long, and yet she cannot look away.

He removes his hat and gives her a small, graceful bow. When he uprights himself, she sees that he is nude from the waist up. His bloodstained lips part and a forked tongue spills from his mouth like a satiny, wet strip of unspooling red ribbon. The tongue drops impossibly low, moving in strange jerky motions, leaving glistening trails on his naked torso as it explores the ridges of his muscled body like an animal scenting something. Then the tongue pauses, as if catching a new scent. It perks up, seeming to sniff the air around it. Both forks pointing at her, it stops.
And then it shoots straight for Beverly’s throat.

Her own scream shocked her. She teetered against the bathroom counter, catching her balance, staring at the tiled floor. Covered in cold, clammy sweat, she raised her head and stared at her own reflection in the mirror. Hers was the face of a hunted animal - her eyes haunted and wide, her lips white with terror, her skin drained of color.

The mirror cracked, dividing her face into two disparate halves.
Beverly Simon slipped to floor, cradled her knees, and wept.

15.  Where can we find you?
The best place to find me and my many links is at my website.

16.  Where can we get The Angel Alejandro?
It’s available in ebook and on its way in paperback at Amazon. 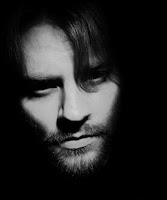 Alistair Cross' debut novel, The Crimson Corset, a vampiric tale of terror and seduction, was an immediate bestseller earning praise from veteran vampire-lit author, Chelsea Quinn Yarbro, and New York Times bestseller, Jay Bonansinga, author of The Walking Dead series. In 2012, Alistair joined forces with international bestseller, Tamara Thorne, and as Thorne & Cross, they write - among other things - the successful Gothic series, The Ravencrest Saga. Their debut collaboration, The Cliffhouse Haunting, reached the bestseller’s list in its first week of release. They are currently at work on their next solo novels and a new collaborative project.